Sheree Anderson, 14, of Rainsville today was named one New Mexico's top two youth volunteers of 2020 by The Prudential Spirit of Community Awards, a nationwide program honoring young people for outstanding acts of volunteerism. As one of the State Honoree, Sheree will receive $1,000, an engraved silver medallion and an all-expense-paid trip in early May to Washington, D.C., where she will join the top two honorees from each of the other states and the District of Columbia for four days of national recognition events. During the trip, 10 students will be named America's top youth volunteers of 2020.

Sheree, an eighth-grader at Roy Municipal School, created a business card to raise awareness of and prevent animal testing that highlight shampoo and conditioner products that are not tested on animals, and distributed 600 copies throughout her community to educate others about this particular form of animal abuse. "I am very passionate about animals," said Sheree, who has ridden horses since she was 3 years old and owns several dogs and a guinea pig. When she discovered that some shampoo and conditioner manufacturers were testing their products on the eyes of bunnies, she resolved to spread the word.

Sheree spent hours on the internet researching shampoos and conditioners that were not tested on animals, then visited local stores to assess their availability. She compiled a list of acceptable products, recruited a sponsor, printed her list on 600 cards, and began distributing her "pockets of knowledge" to family members, friends, fellow Girl Scouts, animal shelters, veterinarians, health food stores and elsewhere in her community. Many of the recipients expressed their love of animals, were shocked to learn about their use in product testing, and vowed to purchase other products from now on, she said. Sheree plans to continue her focus on saving animals from abuse as she pursues her Girl Scout Gold Award.  "I feel that I have a voice in protecting animals, and will continue to teach about animal abuse," said Sheree.

Sheree is the second Girl Scout of New Mexico Trails honoree from Northern New Mexico to be awarded the prestigious award.  Hannah from Eagle Nest was awarded in 2019. 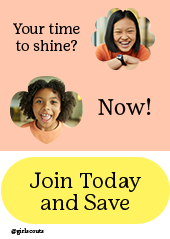